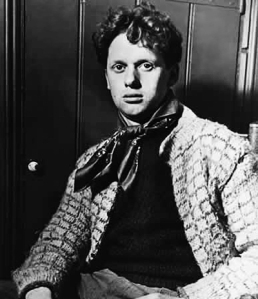 Texts: the poems of Dylan Thomas (pasted below the jump): “In My Craft or Sullen Art,” and a selection from “Quite Early One Morning.”

We also read, but did not record, those old chestnuts “Fern Hill” and “Do Not Go Gentle Into That Good Night.”

[Sound files from this session not yet edited for posting]

IN MY CRAFT OR SULLEN ART

In my craft or sullen art
Exercised in the still night
When only the moon rages
And the lovers lie abed
With all their griefs in their arms
I labour by singing light
Not for ambition or bread
Or the strut and trade of charms
On the ivory stages
But for the common wages
Of their most secret heart.

Not for the proud man apart
From the raging moon I write
On these spindrift pages
Nor for the towering dead
With their nightingales and psalms
But for the lovers, their arms
Round the griefs of the ages,
Who pay no praise or wages
Nor heed my craft or art.

From QUITE EARLY ONE MORNING:

I am Miss May Hughes ‘The Cosy’, a lonely lady,
Waiting in her house by the nasty sea,
Waiting for her husband and pretty baby
To come home at last from wherever they may be.

I am Captain Tiny Evans, my ship was the ‘Kidwelly’
And Mrs Tiny Evans has been dead for many a year.
‘Poor Captain Tiny all alone’, the neighbours whisper,
But I like it all alone, and I hated her.

Clara Tawe Jenkins, ‘Madam’ they call me,
An old contralto with her dressing-gown on,
And I sit at the window and I sing to the sea,
For the sea does not notice that my voice has gone.

Parchedig Thomas Evans making morning tea,
Very weak tea, too, you mustn’t waste a leaf,
Every morning making tea in my house by the sea
I am troubled by one thing only, and that, belief.

Open the curtains, light the fire, what are servants for?
I am Mrs Ogmore-Pritchard and I want another snooze.
Dust the china, feed the canary, sweep the drawing-room door;
And before you let the sun in, mind he wipes his shoes.

I am only Mr Griffiths, very short-sighted, B.A., Aber.
As soon as I finish my egg I must shuffle off to school.
O patron saint of teachers, teach me to keep order,
And forget those words on the blackboard – ‘Griffiths Bat is a fool.’

Do you hear that whistling?- It’s me, I am Phoebe,
The maid at the King’s Head, and I am whistling like a bird.
Someone spilt a tin of pepper in the tea.
There’s twenty for breakfast and I’m not going to say a word.

I can see the Atlantic from my bed where I always lie,
Night and day, night and day, eating my bread and slops.
The quiet cripple staring at the sea and the sky.
I shall lie here till the sky goes out and the sea stops.

Now as I was young and easy under the apple boughs
About the lilting house and happy as the grass was green,
The night above the dingle starry,
Time let me hail and climb
Golden in the heydays of his eyes,
And honoured among wagons I was prince of the apple towns
And once below a time I lordly had the trees and leaves
Trail with daisies and barley
Down the rivers of the windfall light.

And as I was green and carefree, famous among the barns
About the happy yard and singing as the farm was home,
In the sun that is young once only,
Time let me play and be
Golden in the mercy of his means,
And green and golden I was huntsman and herdsman, the calves
Sang to my horn, the foxes on the hills barked clear and
cold,
And the sabbath rang slowly
In the pebbles of the holy streams.

All the sun long it was running, it was lovely, the hay
Fields high as the house, the tunes from the chimneys, it was air
And playing, lovely and watery
And fire green as grass.
And nightly under the simple stars
As I rode to sleep the owls were bearing the farm away,
All the moon long I heard, blessed among stables, the nightjars
Flying with the ricks, and the horses
Flashing into the dark.

And then to awake, and the farm, like a wanderer white
With the dew, come back, the cock on his shoulder: it was all
Shining, it was Adam and maiden,
The sky gathered again
And the sun grew round that very day.
So it must have been after the birth of the simple light
In the first, spinning place, the spellbound horses walking warm
Out of the whinnying green stable
On to the fields of praise.

And honoured among foxes and pheasants by the gay house
Under the new made clouds and happy as the heart was long,
In the sun born over and over,
I ran my heedless ways,
My wishes raced through the house high hay
And nothing I cared, at my sky blue trades, that time allows
In all his tuneful turning so few and such morning songs
Before the children green and golden
Follow him out of grace.

Nothing I cared, in the lamb white days, that time would take me
Up to the swallow thronged loft by the shadow of my hand,
In the moon that is always rising,
Nor that riding to sleep
I should hear him fly with the high fields
And wake to the farm forever fled from the childless land.
Oh as I was young and easy in the mercy of his means,
Time held me green and dying
Though I sang in my chains like the sea.

DO NOT GO GENTLE INTO THAT GOOD NIGHT

Do not go gentle into that good night,
Old age should burn and rage at close of day;
Rage, rage against the dying of the light.

Though wise men at their end know dark is right,
Because their words had forked no lightning they
Do not go gentle into that good night.

Good men, the last wave by, crying how bright
Their frail deeds might have danced in a green bay,
Rage, rage against the dying of the light.

Wild men who caught and sang the sun in flight,
And learn, too late, they grieved it on its way,
Do not go gentle into that good night.

Grave men, near death, who see with blinding sight
Blind eyes could blaze like meteors and be gay,
Rage, rage against the dying of the light.

And you, my father, there on the sad height,
Curse, bless me now with your fierce tears, I pray.
Do not go gentle into that good night.
Rage, rage against the dying of the light.