The collaborative Parallel Octave film ANTHOLOGY I premiered at the Creative Alliance in Baltimore on July 8, 2011. Scroll down to watch some of the films, complete with credits–or check them out on our YouTube channel.

Presenting a few of the ANTHOLOGY I films for your online viewing:

From Sole to Crown
Director: Alice Venessa Bever
Based on the poem “Richard Cory,” by E.A. Robinson
Many thanks to Rebecca Fix
Filmed in Wyoming and Naples, Italy
and the Rome, Italy, Santa Ana and Denver Airports

(6) Adam Gray’s film The Space Between Her Eyes and Mine:

ANTHOLOGY I also included films by Val Smith and Meg Rorison that are not currently available for online viewing.

Images follow from the screening on July 8th at the Creative Alliance. All pictures by photographer Lloyd Lowe.

Post-screening band Forks of Ivy with a larger view of the room at the Creative Alliance.

ARCHIVAL MATERIAL: the ANTHOLOGY I screening and collaboration process 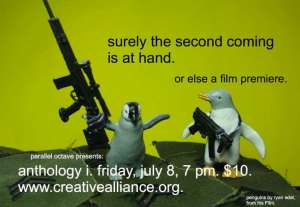 Both videos were created by ANTHOLOGY I editor Ryan Edel from his short film “Slouching Towards Bethlehem,” based on “The Second Coming” by W.B. Yeats.

It’s a music video! It’s a Greek chorus! It’s ANTHOLOGY I. The Baltimore-based Parallel Octave chorus records poems with live improvised music. Eight filmmakers have shot videos for their tracks, from animation to live action to W.B. Yeats as performed by giant plastic lizards to Emily Dickinson read over a soundtrack of pitch-shifting synthesizers. This is the premiere of the half-hour long film collaboration, followed by a live performance by Parallel Octave, in which the audience will be cordially invited to make some noise. Bring your washboards, trombones, vuvuzelas, and your best T.S. Eliot impressions. Poetry was never like this, and neither was MTV. http://www.paralleloctave.com. 7pm. $10, $5 Creative Alliance mbrs.

III: Audience Parallel Octave collaboration session
with Adam’s film of “My Grandmother’s Love Letters,” by Hart Crane.
(Kazoos will be provided at the event but other instruments and voices are greatly desired.)

Track list for ANTHOLOGY I CD follows. Most of these tracks can be listened to on our Recordings page. 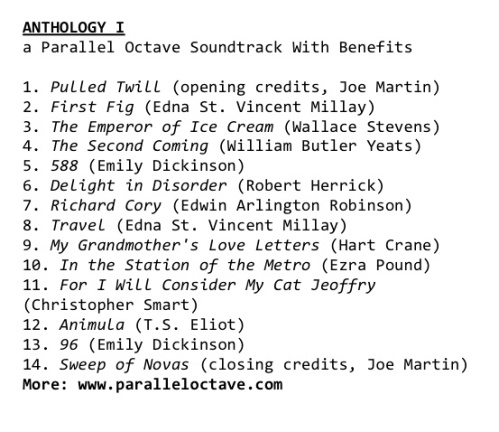 TICKET PROMOTION NEWSFLASH: Those who purchase by June 15 will receive a free Decadent Parallel Octave Party Favor Bag at the event, containing gourmet Baroque Popcorn Balls by a local chef, a limited-edition CD of the ANTHOLOGY I soundtrack, a kazoo, a Purim noisemaker, condoms, Pop Rocks, and more surprises.

The timeline for this project is as follows:
February 15: Applications due.
March 1: Selection complete.
April 15: First drafts of films completed, submitted to Parallel Octave for discussion. Notes given to filmmakers.
May 1: Parallel Octave provides detailed feedback to filmmakers. Editing continues.
May 20: Final versions of films completed.
June 20: Completed film is edited together.
July 8th: Film is screened.

Filmmakers interested in Anthology I should send an email to paralleloctaveATgmail.com by February 15, 2011, with this information:
1) Name and contact information.
2) Resume.
3) Link to previous work online, if available. (We are open to working with first-time filmmakers.)
4) Which poem you propose to work on. Please list backup choices as well.
5) Your short, one-paragraph concept for the film of this poem.

ARCHIVAL: 2011: Special Thanks from End Credits of ANTHOLOGY I film, as screened on July 8, ’11

17 responses to “Anthology I”