April 17, 2014: Preview of Outside In featuring the premiere of The Lorelei, the Albatross and the Pine Tree. By Stana Benesova Kimball.

Excerpt:  The audience might be surprised by the artists’ choice to incorporate songs and poetry in English and German, often spoken and sung at the same time. As Olivia explains: “Mainstream American theater is very monolingual, and I think shades of meaning escape that way.” Throughout the piece, the audience will hear a German text or song, and then the English translation will immediately follow. “One driving force behind my choreographic vision and structure was the idea of translation, especially the liminal space between languages in translation and how that might be represented physically.” 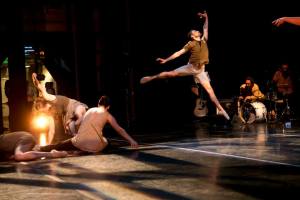 July 7, 2011: ANTHOLOGY I Article in Baltimore Fishbowl. By Rachel Monroe.

Excerpt: “Imagine a music video made especially for a Greek chorus — if that Greek chorus were, say, reciting your favorite poems. Well, that’s what Parallel Octave do, and trust me — it’s the kind of thing you never knew you were missing til you see it for the first time.”

July 1, 2011: Music director Joe Martin is interviewed at WYPR’s The Signal for ANTHOLOGY I. By Lisa Morgan.
Excerpt: “…a modern spin on classic material.”

July 2011: Baltimore Urbanite on ANTHOLOGY I

Excerpt: “In our workshop, students went around the circle and each read a stanza out loud. We read and re-read the poems until our voices came to carry the poem’s emotion. Then we added the chorus. Students chimed in to enhance certain lines or echoed a few beats behind the main speaker. During a reading, I watched my students exchange glances–haunted almost. They’d brought the poem to life.” 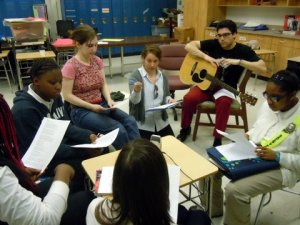 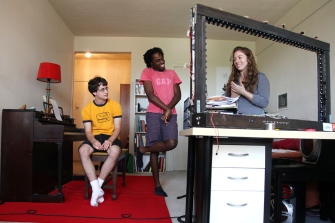 Excerpt: “After less than a year as a Baltimore resident, Dara Weinberg, a MFA candidate in poetry at the Johns Hopkins University, has found herself the de facto wrangler of a weekly gathering of muttering, yipping, drawling, shouting, cooing voices. The voices aren’t in her head—they’re the participants in Weinberg’s directorial project and Baltimore’s new improvisational chorus group, Parallel Octave. Parallel Octave’s rotating cast has included Hopkins philosophers and engineers, Peabody composition students, Single Carrot Theater actors, and occasional drop-ins of miscellaneous provenance. Now taking place at the Baltimore Free School, Parallel Octave is poised to bring all sorts of Baltimore artists together—and perhaps create a new kind of art in the process.

Parallel Octave’s improvisational chorus is a hybrid form, taking cues from Greek choruses, jazz improvisation, spoken-word poetry, and vocal experimentation. Each session starts with a poem read aloud then goes from there, with chorus members providing vocal backup, sounds, and music to bring the poem to life. The group’s name, according to its web site, harkens back to “a time when the theory and practice of poetry and music were one and the same thing: when poems were sung, and when choruses were chanted.” ”

Excerpt: “I’m convinced that Parallel Octave has come up with a brilliant pedagogical method. Over the course of the workshop, I watched reluctant readers grow in their confidence. Each time students read a stanza, they spoke with less hesitation. Students first read as a group and then split into individual parts, which allowed them to practice together and then give it a try on their own. They embraced words they’d only recently learned. They read with expression–something I find rare in reluctant readers. Multiple readings of the poem allowed students to play with tempo and cadence.”